Livermore, CA – Wente Vineyards will host their seventh annual The Front Porch Music Festival this Saturday, August 31st, and feature The Kin, from New York City, and Bay Area based, The Stone Foxes, as co-headliners.1

The Kin recently returned from a successful trip to Australia, where they toured with megastar, P!nk. The group just confirmed they will be the opening band during her U.S. tour as well, which kicks off locally at the Oakland Oracle Arena on October 10th, 2013. The Stone Foxes is a captivating new addition to the stellar lineup. Having performed at one of Wente Vineyards’ Homegrown concerts last year as well as Outside Lands in 2011, the group continues to sell out venues statewide. The complete list of artists in order of performance include:
Garage Band Academy
Lisa Marie Johnston
Crawdad Republic
The Front Porch
Wolf Hamlin & The Front Porch Drifters
The Stone Foxes
The Kin 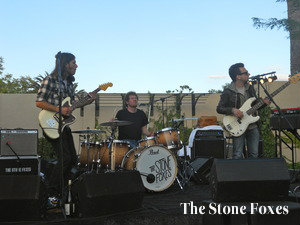 The festival will be held on August 31st, 2013 at Wente Vineyards Estate Winery & Tasting Room (5565 Tesla Road, Livermore, CA 94550) from 2pm – 9:30pm. Food, wine and beer will be available for purchase; no outside food or drink is allowed. Tickets are $20 in advance and can be purchased at TicketWeb.com; tickets will be available to purchase at the door for $30. This event is recommended for ages 12 and up. Alternate routes to Livermore during the Bay Bridge's closure include taking 101 South to the San Mateo Bridge, the Golden Gate Bridge to Richmond Bridge and BART. Details can be found here.


About Wente Vineyards
Founded in 1883, Wente Vineyards is the oldest continuously-operated, family-owned winery in the country; owned and managed by the fourth and fifth generations of the Wente family. The winery draws from nearly 3,000 acres of Estate vineyards in the Livermore Valley, San Francisco Bay and Arroyo Seco, Monterey appellations to create an outstanding portfolio of fine wines. Wente Vineyards is distributed in all 50 states and in over 70 countries worldwide.  In 2010, Wente Vineyards was among the first wineries to receive the Certified California Sustainable Winegrowing designation, and one of the only wineries to certify every aspect of its business. In 2011, Wente Family Estates was named American Winery of the Year by Wine Enthusiast and a top 30 wine company by Wine Business Monthly. 2012 marked the 100th anniversary of the Wente family bringing Chardonnay cuttings to California. Today, the Wente clone of Chardonnay is the most widely planted in California. This year, the winery celebrates its 130th anniversary.

[1] Due to scheduling conflicts, The Lone Bellow will no longer be a co-headliner at the event. The band is planning to perform at the winery in the near future.